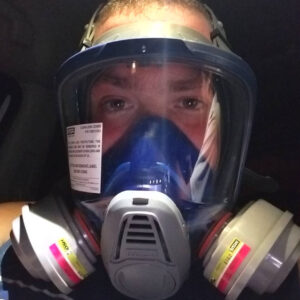 I started working with metal when I was 20 years old. My grandfather was always welding and tinkering in his work shop behind his house. Growing up, I was always watching him and slowly learning from him.  At the time I never thought much of it and had different plans for my future. As we all know life happens and opportunity strikes when we least expect it.

At the end of 2014 I had an opportunity to be a welder on a pipeline, and all I had to do was go to school and get certified and the job was mine. Once I obtained all my certificates, I met with the employer to find out that they were doing layoffs. With my hopes crushed, I swallowed my pride and found other work in the oilfield as an occasional welder, but it wasn’t what I wanted to do. I then told myself right then and there, if there ever came an opportunity to open my own shop and create what I wanted, then that would be my life’s calling. It was really ironic when I realized I just went full circle and would be doing exactly what my pap did and I wish he was still alive then so I could have told him. I think my pap would be excited with the progress I’ve made.

Its funny, they say things happen for a reason and maybe I wasn’t meant to be at that position.  Maybe I had to struggle and take the hits, to fail and see that it was not what I was destined to do. I know now what I want to do and that’s to create metal pieces for people, from wall art to fire pits to any thing you can think of.

Elite Alloy Concepts came from the idea that if people had an idea or concept of something, but didn’t know how to do it, I would step up and create it to the best of their knowledge. No matter what. I set such high standards for myself because I’m helping someone else’s dreams come true, and to see their smile and pure disbelief in making their idea a reality is certainly something to strive for. I have too much pride and heart for my work to settle for anything less. That is the standard for Elite Alloy Concepts and that’s the standard on how I have lived my whole life and will continue to do so. It’s a concept that has been there since the beginning and I promise, it will still be there once I’m long gone.